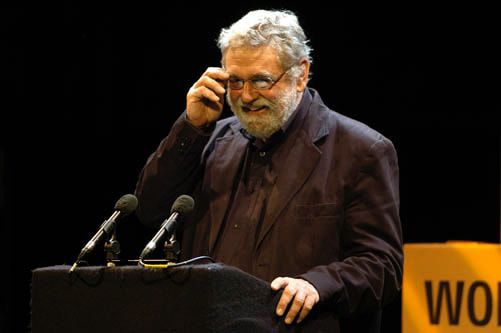 Louis Jenkins
.
Louis Jenkins' poems have been published in a number of literary magazines and anthologies.  He published 14 collections of his poetry. He was awarded two Bush Foundation Fellowships for poetry, a Loft-McKnight fellowship, and was the 2000 George Morrison Award winner.  Louis Jenkins frequently read his poetry on A Prairie Home Companion and was a featured poet at the Geraldine R. Dodge Poetry Festival in 1996 and at the Aldeburgh Poetry Festival, Aldeburgh, England in 2007.

"To imagine what it means to be another human being is an
act to love.  These are poems written by a great lover of the world.  Everything in it that stands alone, unobserved and luminous.  Solitary people with their solitary destinies...if there's a native, archetypal American solitude, Louis Jenkins has given us its flavor"
Charles Simic, Boston Review


"Louis Jenkins picks up the scraps of anyday's events and lets them fall deep into the Underworld.  You can hear them re-sounding long, long after.  I really do love his poems."
James Hilllman


"...the true artist pulls aside some comforting, humanly made veil, so that the face of the universe appears for an instant.  Artists as distinct as Goya and Basho do that, revealing a face that unsettles us.  I honor Louis Jenkins, who is one of the best poets of his generation, for his ability to do that again and again."
Robert Bly


"...Mr. Jenkins’s language, moving like the flowing of a river through both the shallows and the depths, has a lightness of touch even when it is at its most plainly philosophical.  Jenkins’ seemingly modest writing, attuned to close observation of everyday experience, contains, beneath its homely surfaces, larger meanings that glide softly into your mind and heart, like those elusive fish swimming beneath the ice. "
Charles Isherwood, New York Times